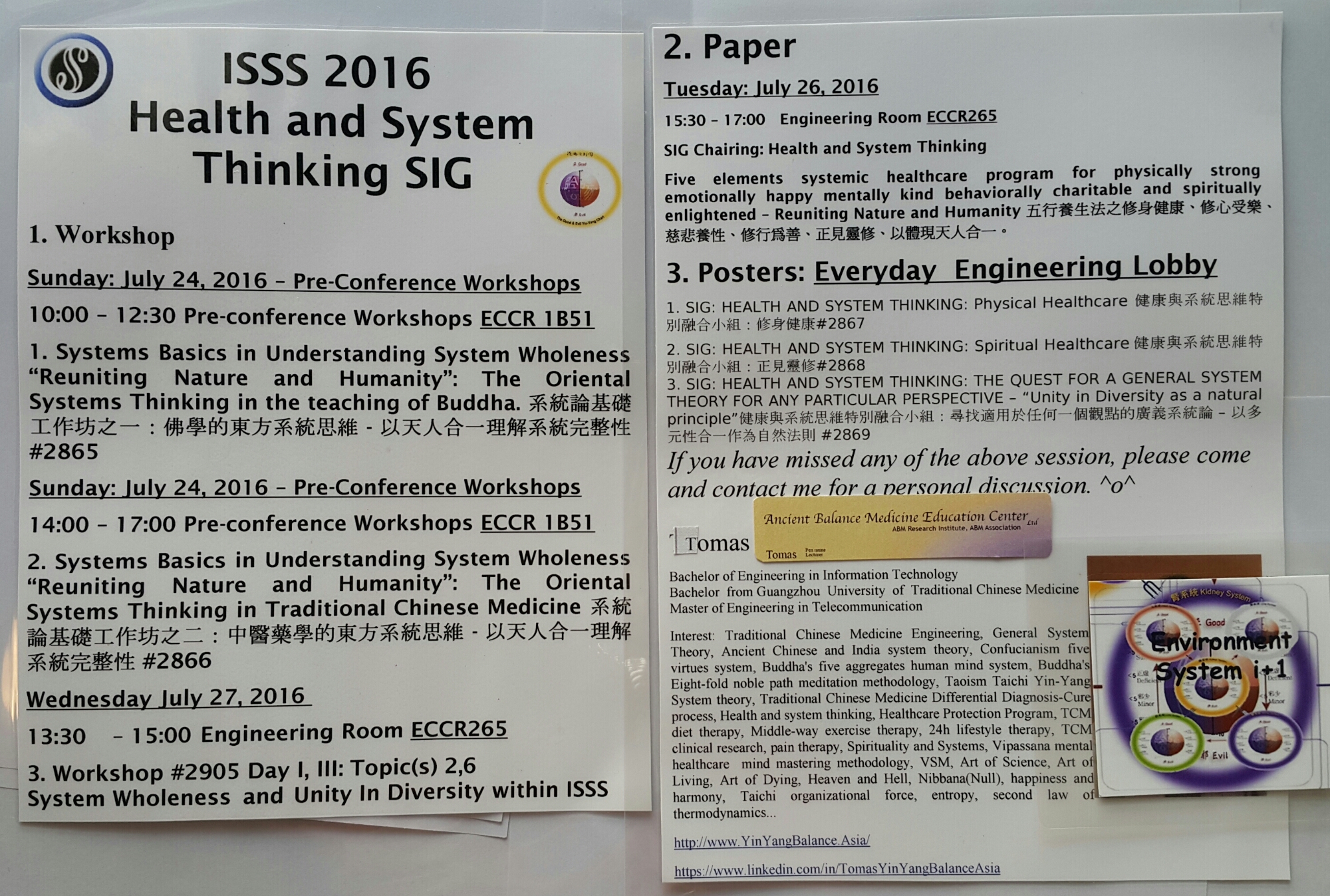 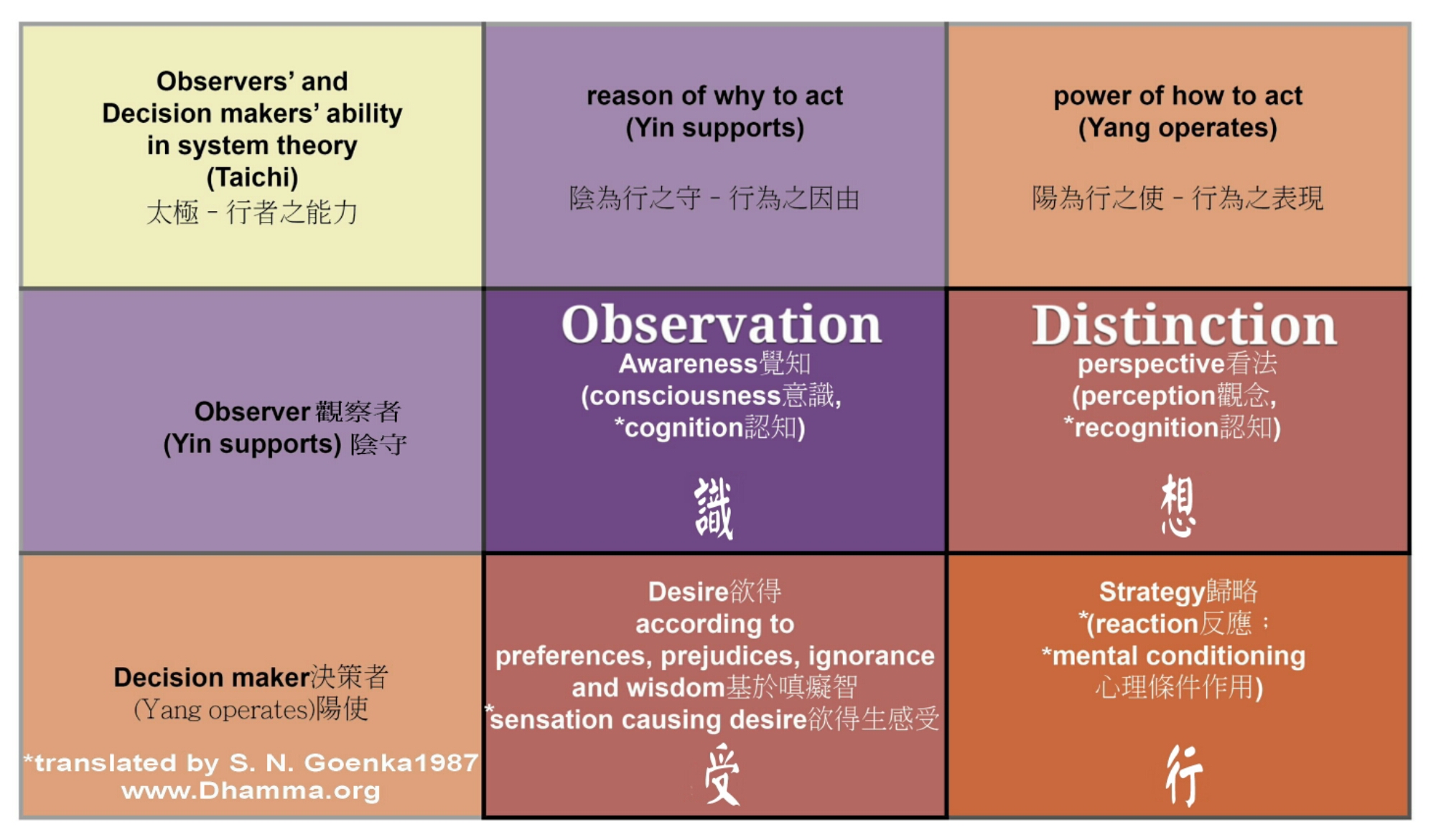 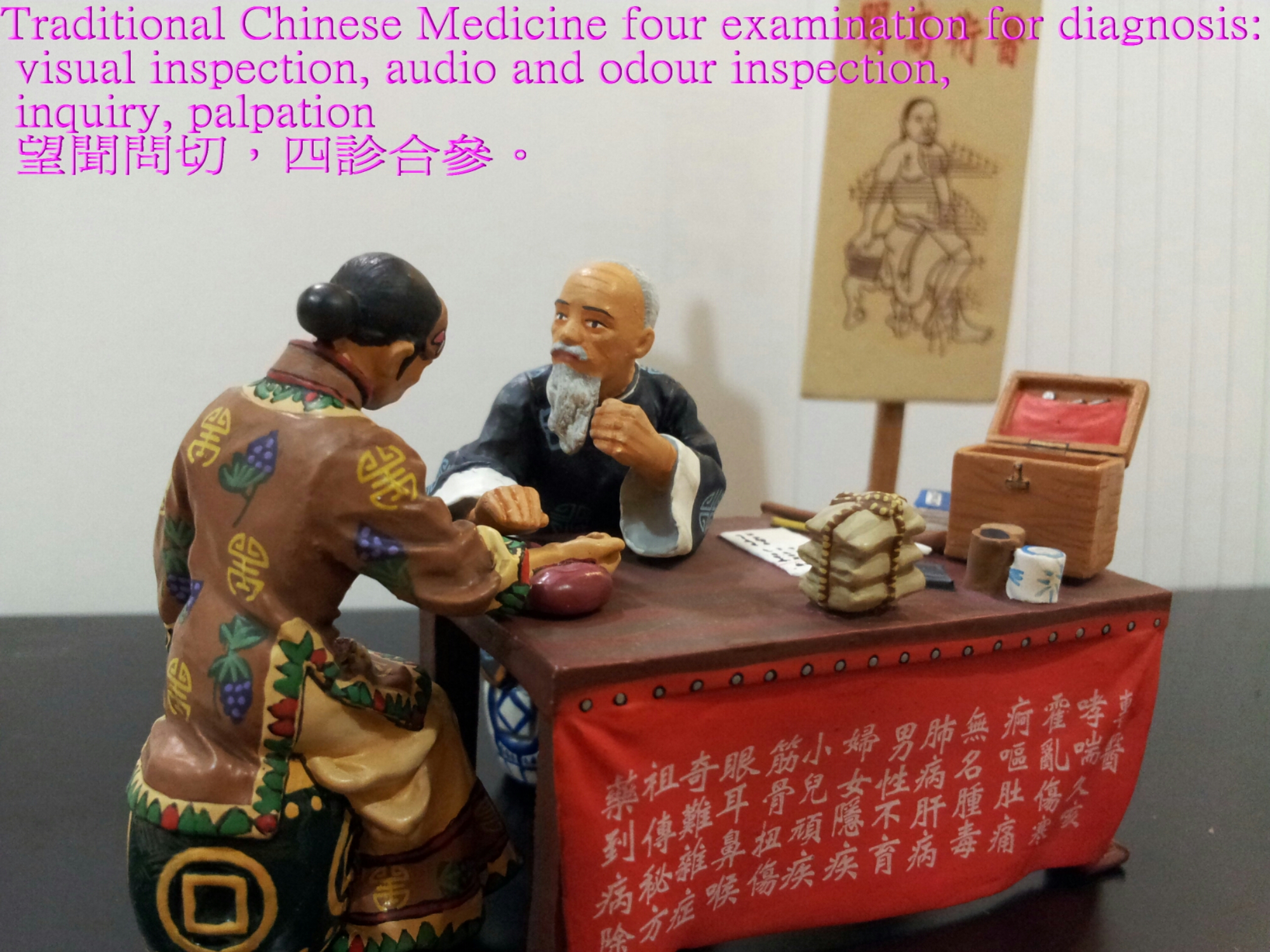 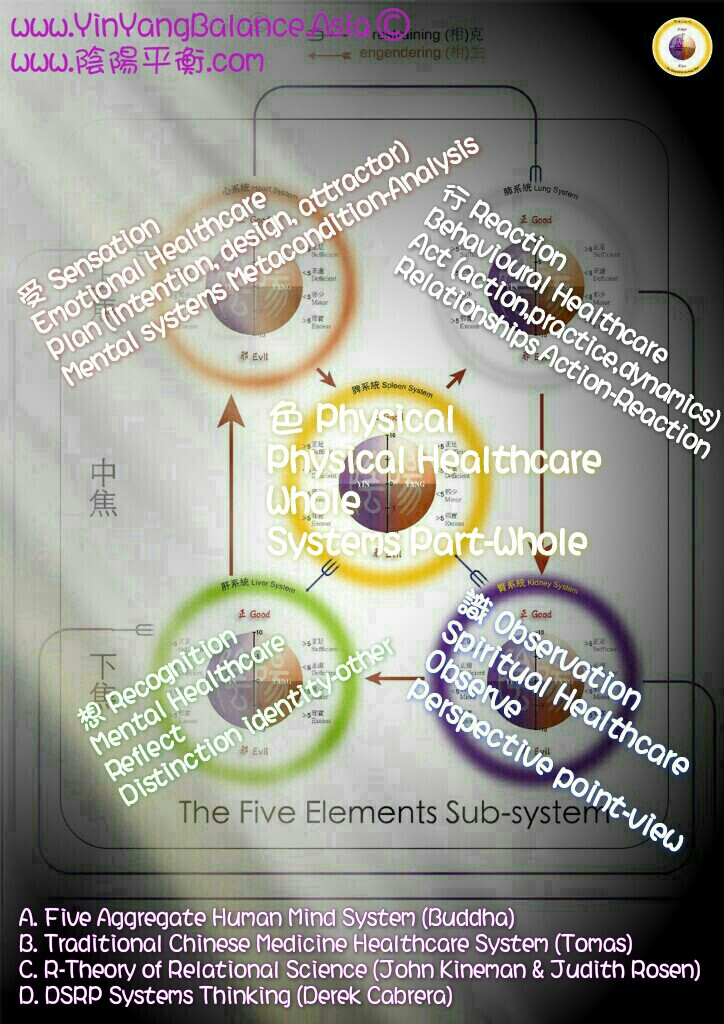 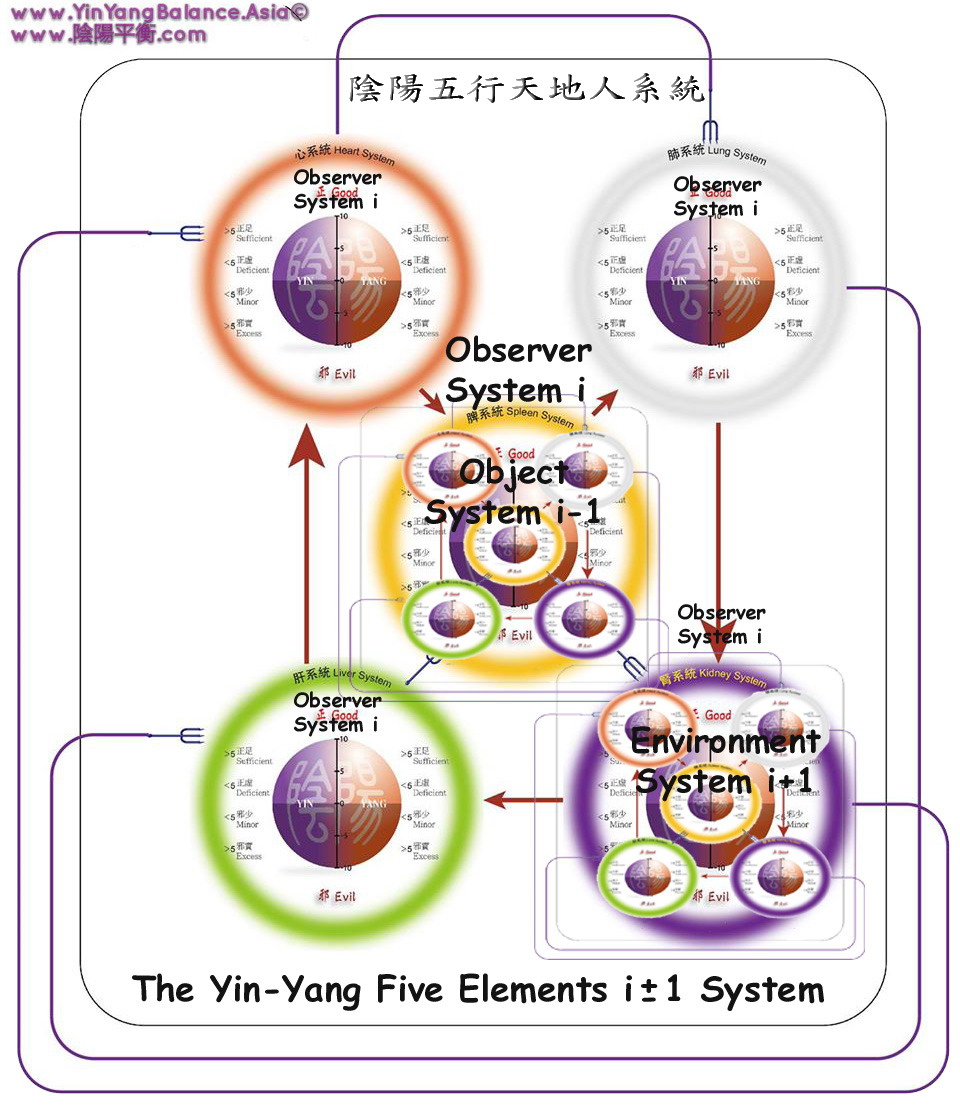 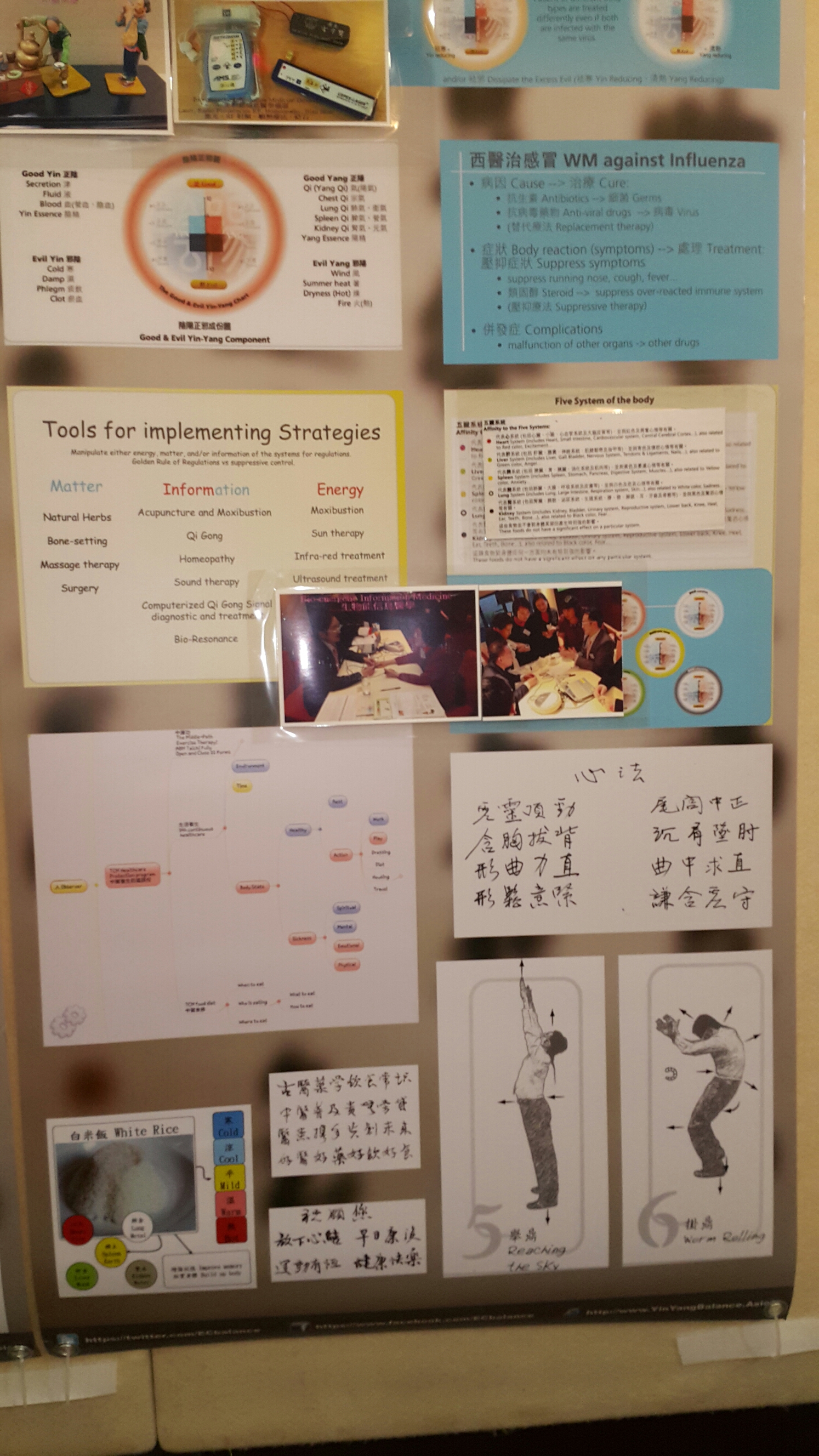 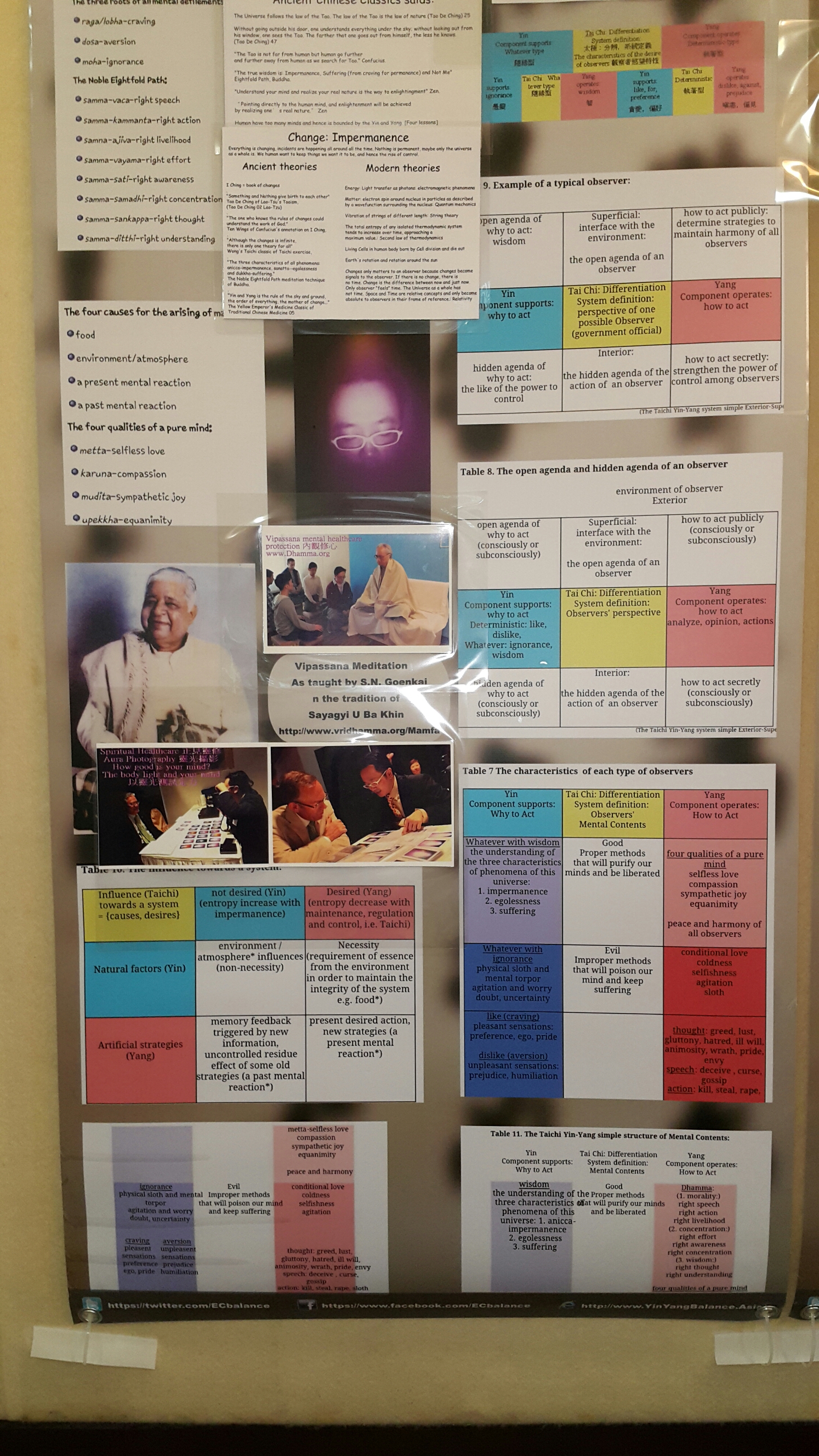 3. SIG: HEALTH AND SYSTEM THINKING: THE QUEST FOR A GENERAL SYSTEM THEORY FOR ANY PARTICULAR PERSPECTIVE – “Unity in Diversity as a natural principle”健康與系統思維特別融合小組：尋找適用於任何一個觀點的廣義系統論 – 以多元性合一作為自然法則 #2869 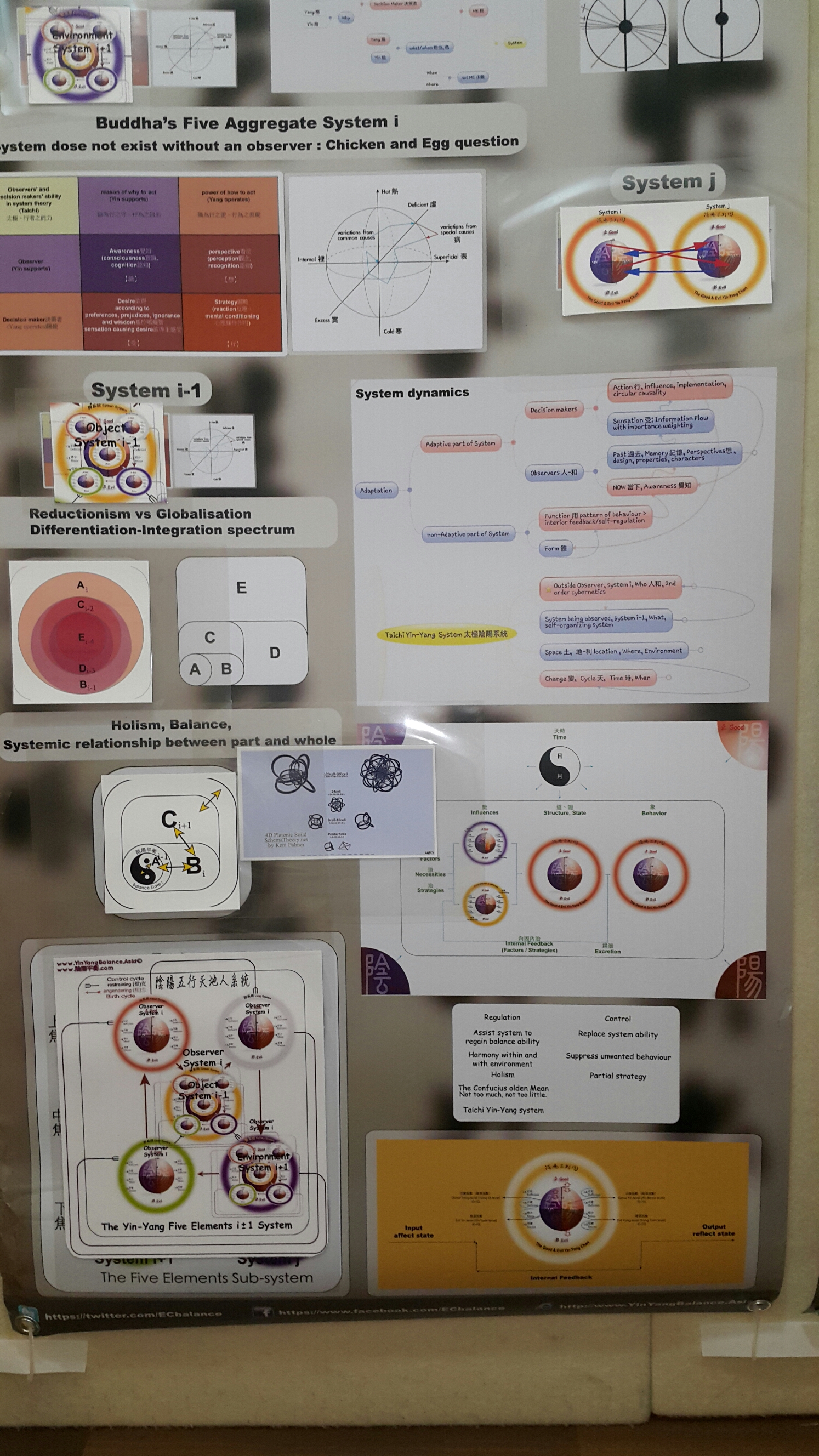 If you have missed any of the above session, please come and contact me for a personal discussion. ^o^ 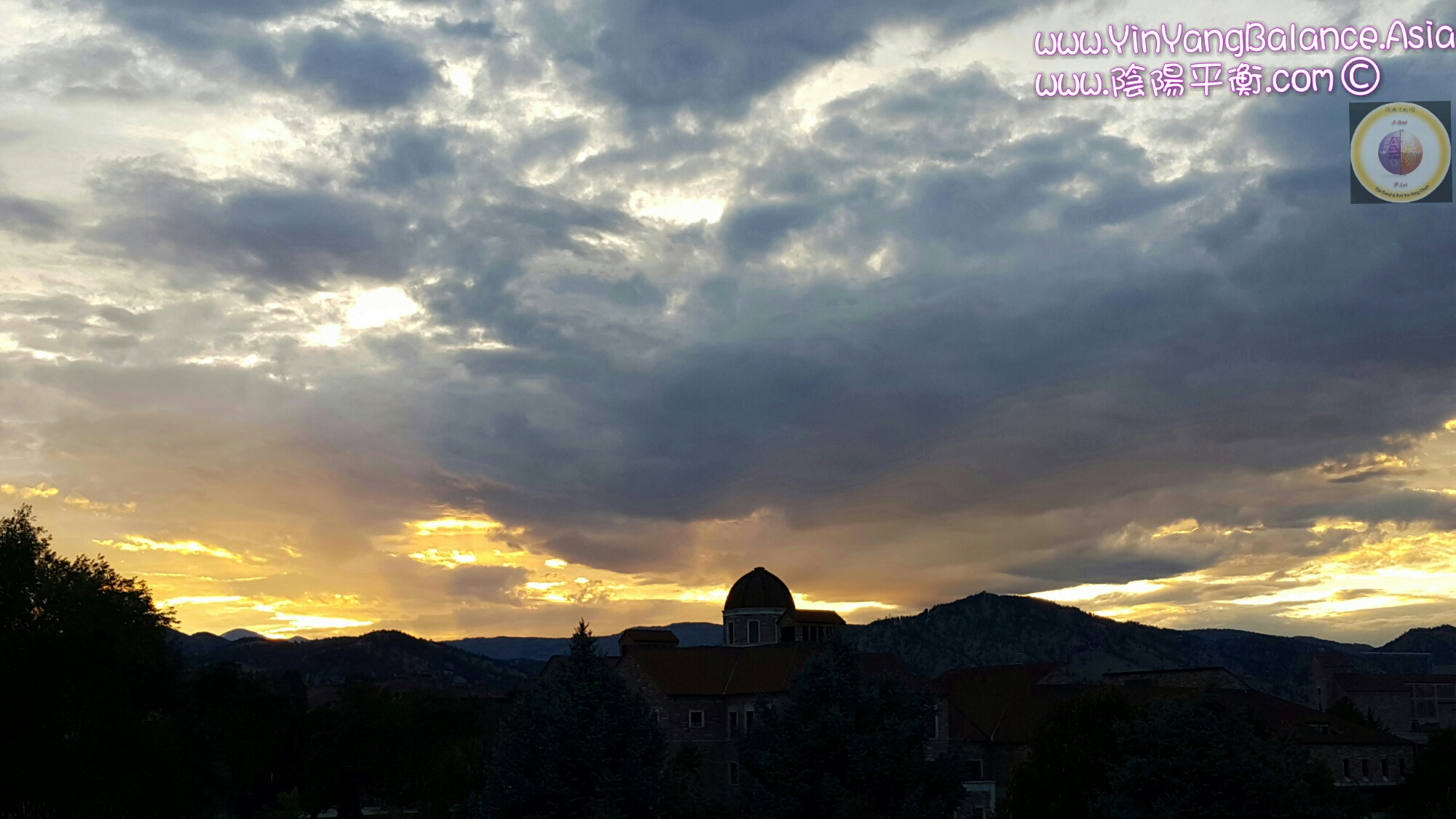 –國際系統科學協會第60屆週年國際研討會 The 60th Annual World Conference of the International Society for the Systems Sciences www.isss.org/

Presentation: System wholeness and Unity in Diversity within ISSS 系統的完整性與系統界之求同存異、博大精深、見微知著、對立統一。

Abstract: A better way to explain the wholeness from an oriental point of view is the major direction of our research, but in the end it seems to coincide with modern Western systems thinking such as Relational-theory and DSRP systems thinking, as well as physics and mathematics. The first step starts from the concentration on the parts as in Reductionistic thinking, to the concentration on wholeness as in Systems thinking. Both schools of thought are important in their corresponding applications. The second step involves the combination of the observer and decision maker into the system, similar to the five aggregates human mind system in the teaching of Buddha, and the Relational-Theory by John Kineman. But finally the structure of the environment also need to be included for the sack of wholeness, similar to Schema theory by Kent Palmer. Now all three are coming together and forming the much better wholeness. However, this is only the structure and properties of the wholeness, and there is also the diagnostic and regulative part from Traditional Chinese Medicine, which could be the application part of systems theory in real life problem solving. Together they are very promising in forming the wholeness of systems theory and systems practice.

The structures and functions of human body in Traditional Chinese Medicine is based on the oriental system thinking of Taichi Yin-Yang structures and functions. Researches show that similar structures and functions are found in modern Western systems theories which are composed of systems, observers and decision makers, and the environment. TCM employs different systemic models to diagnose the human body. However, all these models employ the common 3D structure of Superficial-Internal, Cold-Hot, and Deficient-Excess spectrums. This oriental systems thinking seems promising in combining with modern Western systems theory in the application of system diagnosis and re-balancing. It is hoped that the combination of the east-west systems thinking will finally help human understanding in solving the modern complex problems.

Chinese writing, English writing, Middle East writing emerging from different directions will in the end all occupy the whole paper to express the intended ideas, emotion, systems, instructions, and knowledge. Different systemic models arise together with their corresponding observers and decision makers. That is, people located with different geometrical properties, from Southern or Northern part of china. In addition, people with different properties because of the different state of their civilization, either at war or peace, lack of or over-supply of food, too much leisure or too much hard work. That is to say, the systemic model is also related to the environment, combined and emerged into the perspectives part, the water sub-system, of the whole system.

-Platonic Solids in All Dimensions: http://math.ucr.edu/home/baez/platonic.html