The Formation of Systems 系統之生成 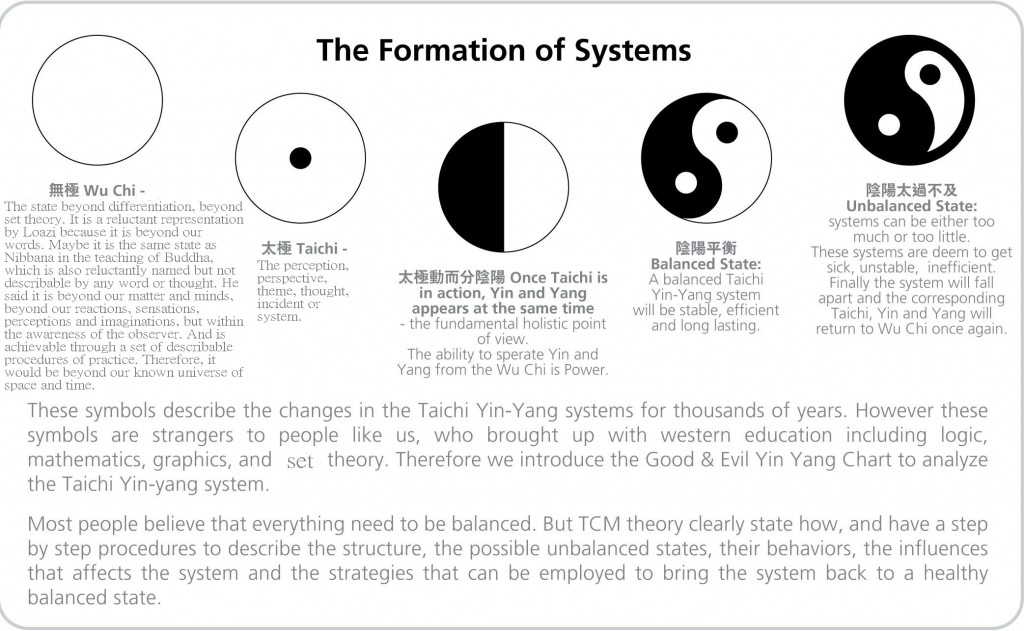 無極Wu Chi –The state beyond differentiation, beyond set theory. It is a reluctant representation by Loazi because it is beyond our words. Maybe it is the same state as Nibbana in the teaching of Buddha, which is also reluctantly named but not describable by any word or thought. He said it is beyond our matter and minds, beyond our reactions, sensations, perceptions and imaginations, but within the awareness of the observer. And is achievable through a set of describable procedures of practice. Therefore, it would be beyond our known universe of space and time.

太極動而分陰陽 Once Taichi is in action, Yin and yang appears at the same time. – The fundamental holistic point of view of anything in our observable universe. This ability of separate Yin and Yang from the Wu Chi is the Power of organization.

陰陽太過不及 Unbalanced State – Systems can be either too much or too little. These systems are deem to get sick, unstable , inefficient. Finally the system will fall apart and the corresponding Taichi, Yin and Yang will return to Wu Chi once again.

These symbols describe the changes in the Taichi Yin-Yang system for thousands of years. However these symbols are strangers to people like us, who are brought up with western education including theories of logic, mathematics, graphics and states. Therefore we introduce the Good & Evil Yin Yang Chart, geometry, set theory, Venn diagram, graphics and tables to analyze the Taichi Yin-Yang system.

It is a believed that everything need to be balanced. But Traditional Chinese Medicine clearly state how, and have a set of step by step procedures to describe the structures, functions, the balanced state, the possible unbalanced states, their behaviours, the influences that affects the systems and the different classes of proper strategies that can be employed to bring the system back to a healthy balanced state.